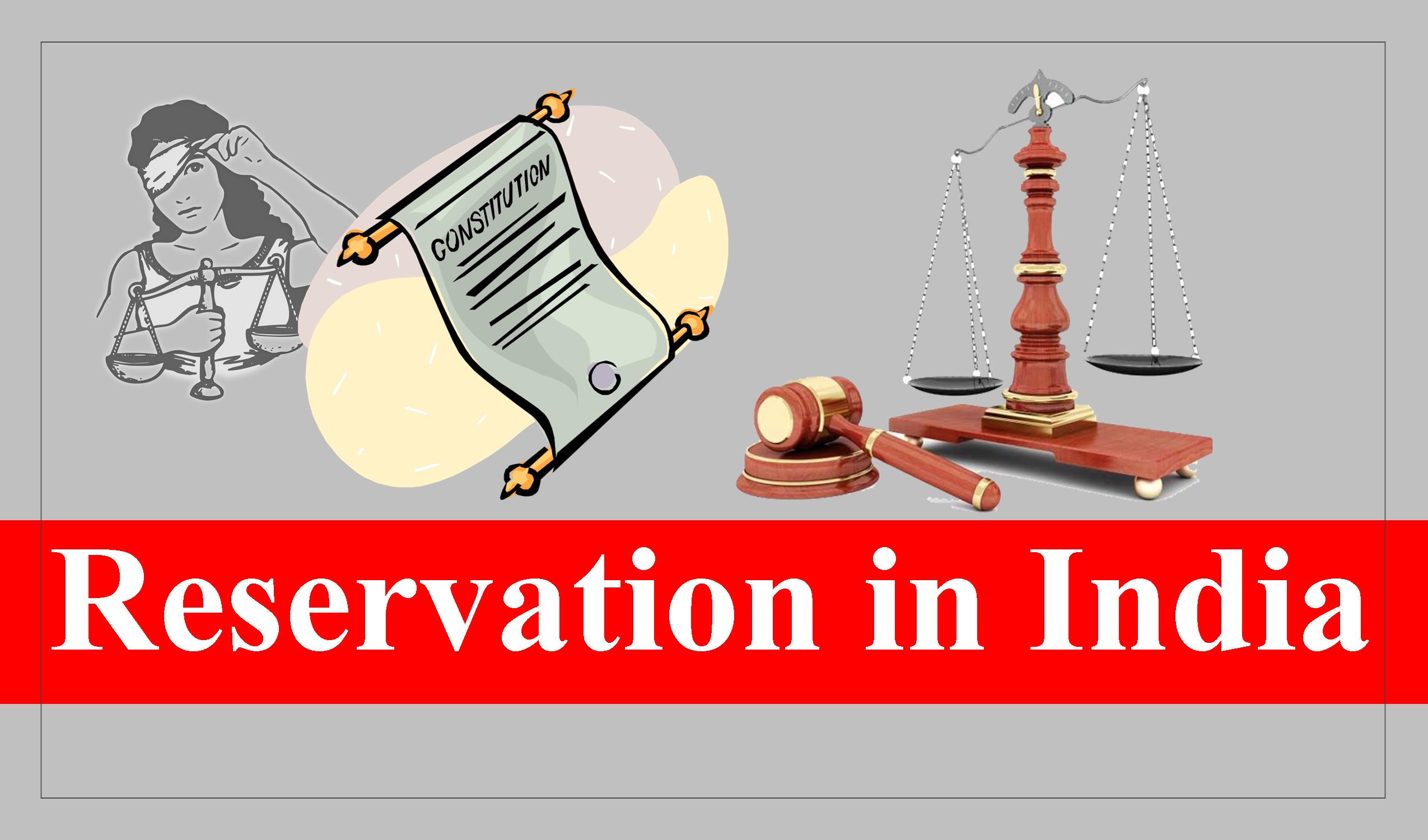 [1]The reservation system has always been in the limelight as this policy has its own supporters and opponents. 29 years back, in the landmark case of [2]Indira Sawhney v Union of India, a 9-judge constitutional bench laid down two important precedents-

The Supreme court has tended to put a cap on the reservation in order to ensure that it only serves its purpose and not assist the privileged i.e., only those people can claim reservation who are actually backward, socially, educationally and economically. The main intention of introducing this policy in India was to uplift the SCs and STs, who were historically oppressed and denied equal opportunity in having a say in the national-building process. Their adequate representation in ‘sharing of state power’ was required as, at the time of independence, the administration was controlled by fewer communities and the downtrodden were not amongst those communities.

In order to implement this idea of providing reservations to the lower strata of the society, many committees were set up pre and post-independence. Before listing the committees, it is significant for us to know that it was [3]Jyotirao Phule and William Hunter who conceived the idea of introducing caste-based reservation in India in the year 1882 as they felt the need to uplift the status of the lower class and reservation was sought to be the most accurate way at that time.

[4]The purpose of providing reservation included-

[5]The committees and commissions that have been set up so far for the issuance of reservation in India include:

Through the establishment of these committees and commissions, it can be expressed that many steps have been taken to uplift the condition of the socially backward classes.

However, the reason for providing reservation to the needy has changed to vote bank politics from the upliftment of the poor.

The reason our Constitution provided for the ‘reservation’ was to secure socio-economic justice for the downtrodden and vulnerable sections of the society as for many centuries, due to the caste-based system, the lower caste was denied educational opportunities and also other opportunities that came their way. Being vulnerable and powerless in front of the upper castes, they did not have a voice or even if they had, it was suppressed by the dominating upper classes. This is one of the reasons why the Constitution of India consciously included the element of ‘equality’ as a fundamental right to ensure that every citizen is treated equally irrespective of their caste, class, religion, sex, etc.

Even after including the ‘equality’ factor as one of the objectives of the Constitution, there were certain areas where discrimination and separation was still prevalent and therefore, the ‘preferential treatment’ policy was adopted to help the weaker sections of the society and provide them with equal opportunities so that they can also contribute towards the nation-building process.

However, the question that is needed to be answered here is whether-

PRESENT CONDITION OF SCs and STs IN INDIA

Though the reservation system has clearly helped the backward communities of India, there are still many people who are either unaware of it or who are residing in such areas that due to lack of infrastructural facilities, they are unable to claim such reservation. It needs to be highlighted that only providing reservation to these people will not help with their upliftment.

Reservation is definitely one of the ways to uplift the status of the backward communities but it is not the only way. Though our Constitution has provided for the basic Fundamentals rights like access to free education, etc., there is also a need to ensure that it gets to everyone. Other than that, it is extremely necessary to abolish caste system. The existence of the caste-based system is itself the cause of inequality that is still persisting in several parts of the country. Where people are trying to get the caste-based reservation system abolished, they should try to abolish the caste system only.

The present condition of SCs and STs has definitely improved due to the reservation system but still, in some areas, they are treated unequally because of their lower caste status.

[8]ARE THE RESERVATION POLICIES BEING IMPLEMENTED IN TRUE SPIRIT?

The introduction of new reservation policies by the states has become more of a strategy to collect votes and win elections. The politicians look at reservation policy as a political ‘goodie’ and as a means to achieve their political agenda rather than actually putting an effort to create a just society. The focus has now shifted from creating new opportunities for the lower castes to redistributing the existing ones.

It can also be observed that the benefits of the caste-based reservation are being reaped by those who have extensive access to the educational opportunities. The link between the reservation and social justice has started to fade due to the presence of such ‘anomalies’ in the system which threaten the legitimacy of the Constitution of India.

The social justice needs to be restored in order to see an upliftment in the socially and educationally backward class as till the time the reservation benefits are being sowed by those who have access to educational opportunities, thus providing limited chances for those who really need it, the inequality wouldn’t dissipate.

IS BREAKING THE 50% RESERVATION CEILING JUSTIFIED?

Supreme Court’s judgement regarding the 50% reservation ceiling has been challenged by the state governments several times. In the Indra Sawhney judgement, the Supreme court laid down two rules and stated that in order to provide reservation to a community, that community should belong to ‘socially and educationally backward class’ and that only 50% reservation shall be provided unless an ‘exceptional circumstance’ is declared.

Recently, Maharashtra government was in the limelight for providing 69% reservation policy to its citizens in the educational and employment sector. In the case of [9]Jaisri Laxman Rao Patil v Chief Minister, Maharashtra, the Supreme Court struck down this 69% reservation policy stating that there is no requirement for providing 69% reservation to the people since the Maharashtra government had not mentioned any ‘exceptional circumstance’ in its petition. The Supreme Court considered the contentions made by the State baseless and inconsiderate as the Maratha community was considered to be the dominant forward class and hence their condition did not qualify for the ‘exceptional circumstance’.

Another reason asserted by the Supreme Court while striking it down was that according to the statistics, when a particular community faces the general category candidates and seeks the maximum number of seats in institutions, then increasing the reservation for such community would be considered as ‘unjustified’ and ‘immoral’. It was expressed that the Maharashtrians had obtained several numbers of seats in several institutions when it comes to employment and educational opportunities.

The question whether the Supreme Court should allow for more than 50% reservation has been doing rounds and it can be seen that the states are clearly not happy with this ceiling. The main reason why such extended reservation should not be provided to a particular community is that it will affect the general candidates in securing jobs and seats in institutions. It will create more gaps between the lower castes and upper castes and in the process of trying to uplift the lower castes, the general candidates will be left behind and they will have to put much more efforts to secure the same seat in an institute. This will further create animosity among the general candidates for the reserved candidates.

This kind of reservation is completely unconstitutional and arbitrary as it disrupts the basic principles enshrined in our Constitution under Article 14 and Article 16.

CURRENT STATUS OF RESERVATION IN INDIA

To remove the social oppression and injustice suffered by the lower classes, this tool of reservation was introduced by the Government of India. It was implemented in true spirit and conscience and in consideration of the impoverished condition of the lower classes who were denied justice due to their status in the society. However, the way the reservation policy is formulated and implemented in today’s time is largely governed by the vote bank politics. The class-based reservation system has converted to caste-based reservation system.

As mentioned earlier, reservation is not the only way to upgrade the condition of the backward communities. Providing them with scholarships, coaching, welfare funds, etc. to enhance their intellectual abilities and personal knowledge is a way to elevate the shape of lower castes. The intention of the reservation should be to ensure that all people are brought to the same level in terms of opportunities.

In order to ensure that the perks of reservation policy go into the right hands, certain steps will have to be taken in order to monitor the situation.

The need for revising the reservation policy is absolutely there. It needs to be more inclusive and aim towards equality. Government needs to take certain steps to minimize the corruption in the reservation system. Politicians’ personal needs should be kept aside and focus should be put more on the welfare of the downtrodden section of the society. In order to restrict the misuse of this policy, certain steps like restricting the reservation benefits to two children per family would help as it will give way to principle of equality. The reservation policy should not be considered a way to achieve profits and money for those who are roaming with a stamp of socially and educationally backward class where in reality, they are not. Reservation policy is good as long as it benefits the actual downtrodden section of the society. When people wish to be backward instead of forward, the country stagnates.

[6] Chaired by Kaka Kelkar; It was the First Backward Classes Commission

*The views in this article are author’s point of view. BSK Legal may or may not subscribe to the views of the author. This article is not intended to substitute legal advice. Any portion or part of this article can be reproduced, copied or used, in whole or in part, after giving due credit to the publisher. The Copyright of the article is with the author.